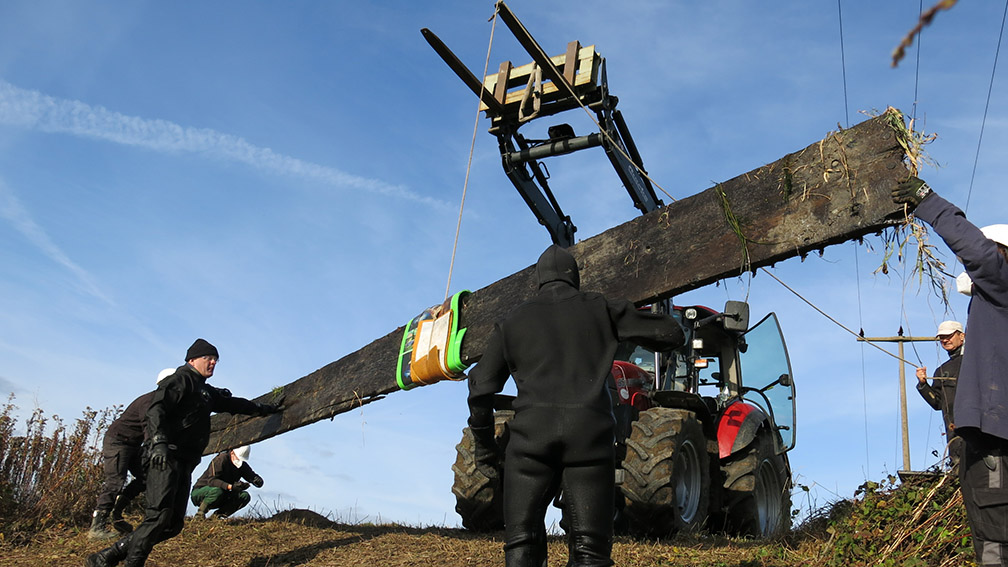 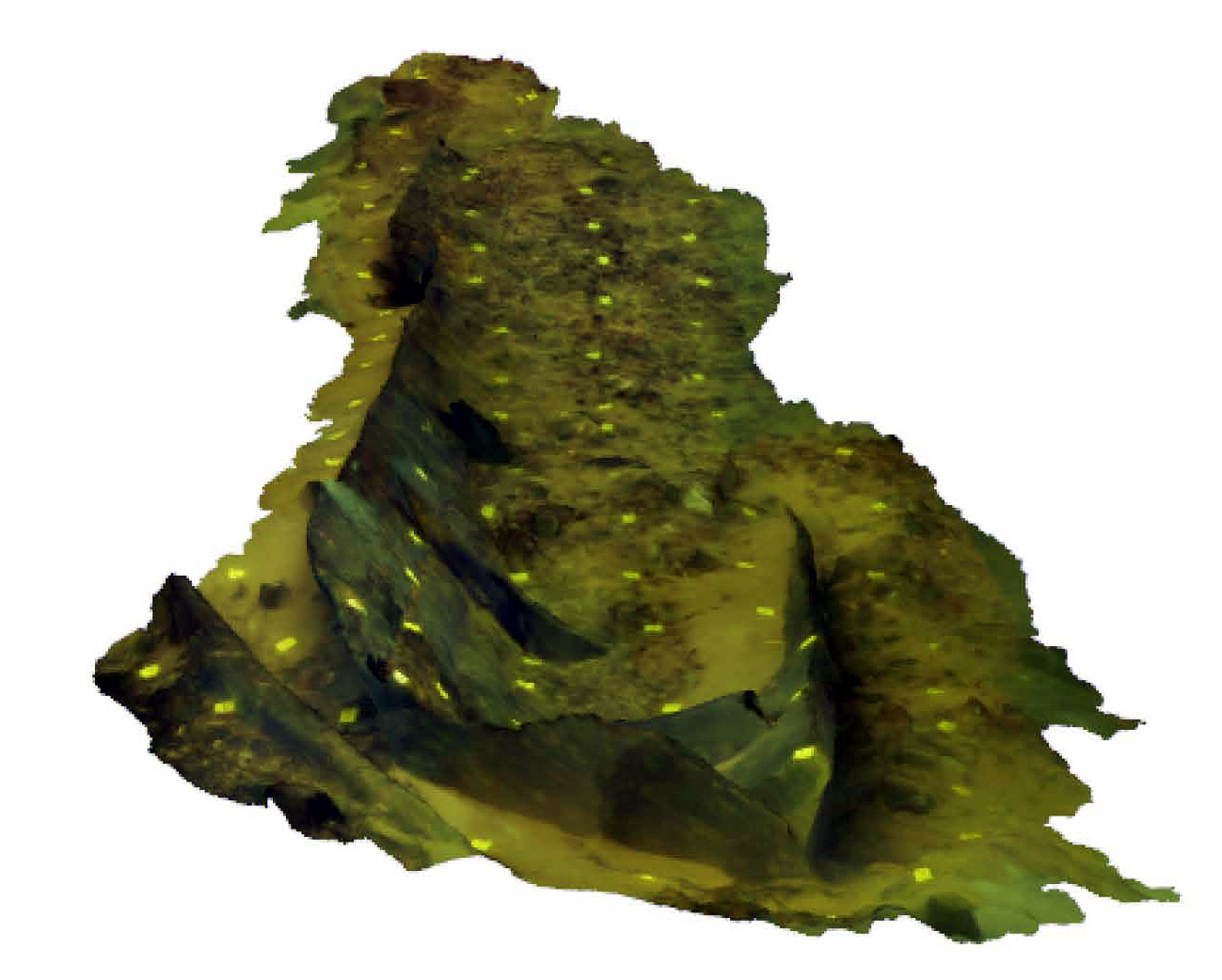 Structure From Motion in a fluvial archaeological environment

On dry land, Structure From Motion (SFM) has been a well-established technique of archaeological documentation for some years now. In submerged sites it has remained to be exceptionable. The main reasons for that are restrictions resulting from poor visibilities or permanently changing subaquatic environments, as caused by currents.

The “Lippewrack” proved to be an example for such a complex task. The monument is positioned in 2,5m water depth. Photographing at visibility conditions of up to 1,5m was strongly handicapped by currents reaching values between 0,3 – 0,5m velocity. Problems occurred with the stabilizing of the camera as well as with objects floating into the scene during the documentation process. We needed four series of photo-shooting, summing up to 1135 singular pictures, to produce a 3D-model of the visible portions of the wreck. Due to problems of the software to match the pictures automatically, many photographs had to be added to the model manually. The result included a fully georeferenced orthophoto, plan and profiles.

Read more about SFM-documentation of shipwrecks 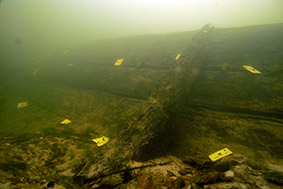 In cooperation with the Sächsisches Textilforschungsinstitut, the Landesamt für Denkmalpflege, Dienststelle Hemmenhofen, and the Kuratorium Pfahlbauten we took samples at different sites in the Western Lake Constace area. Some of the respective geotextiles are now almost four decades positioned under permanent water cover. They serve as protection layers for prehistoric culture layers and pile fields. The STFI aims to investigate functionality, degradation and potential impact to archaeological relics as well as to the natural environment.. 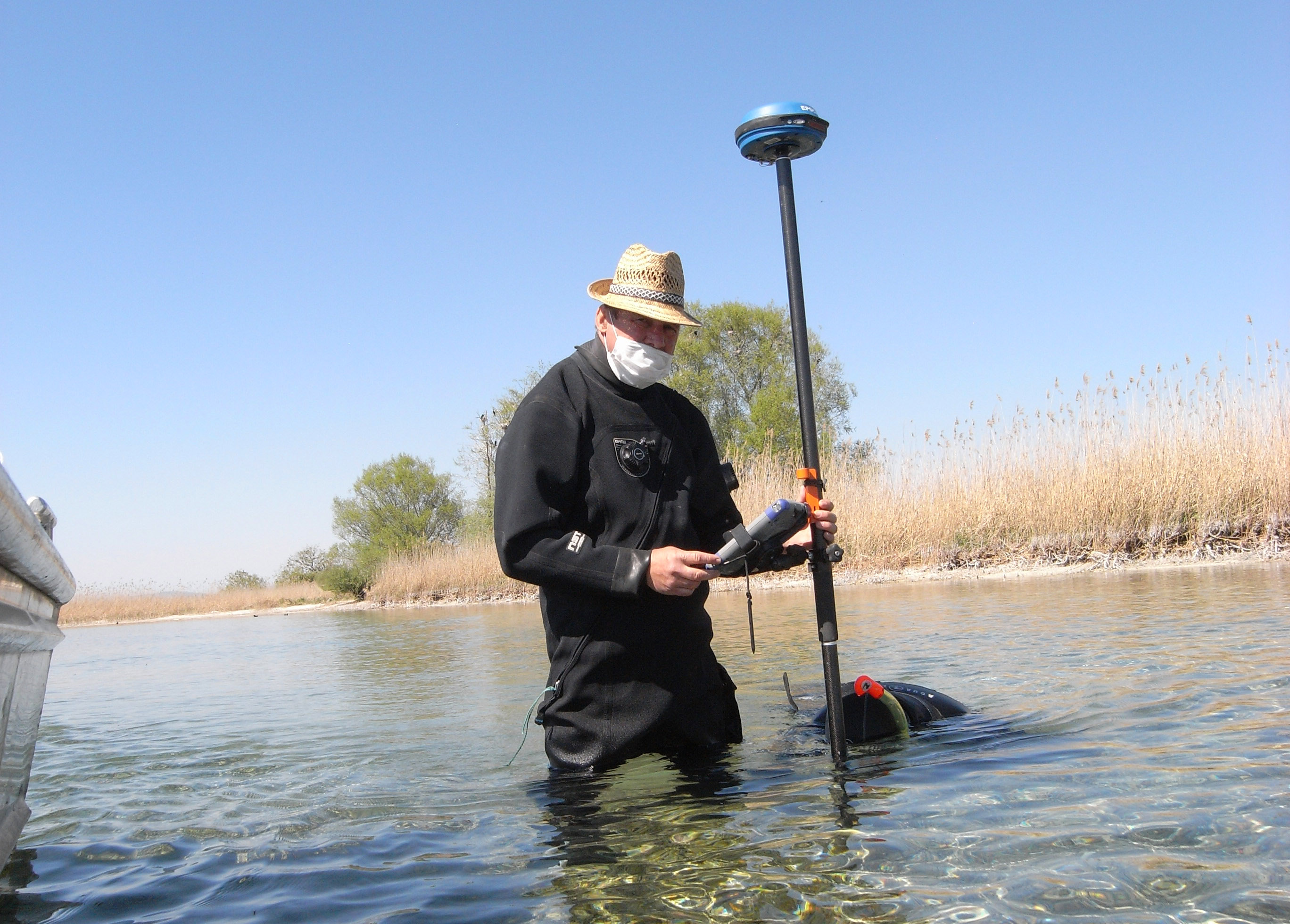 Covid 19 constitutes hitherto unknown threats to scientific diving teams. In a professional environment dependent on close physical cooperation of team members the disease afflicts working procedures and requires new safety precautions. Risk assessements need to be adapted accordingly, which is a difficult task with so many informations on the virus, many of them preliminary.

UwArc´s spring 2020 campaign adopts the general rules we use in every-day life and in other working environments. Hold distance to team members (and others) at all times! Wear face masks at all occasions you need to be close to each other! Disinfect / wash your hands! Keep all commonly used tools and equipment clean and disinfected! Be aware of your own body secretions, especially in the moist conditions of a tightly packed vessel and in case of emergency! Avoid unnessesary contacts, keep record of professional visits / visitors!

The prehistoric lake shore sites in the shallow water sites of Lake Constance are seriosly threatened by erosion processes. From the middle of the 1980ies on the Landesamt für Denkmalpflege, Dienststelle Hemmenhofen created archaeological reservations to mitigate increasing damages and protect the sites for future generations. Archaeological monitoring of the 2020 spring campaign focused on the re-assessment of hydraulic engeneering measures like textile and gravel covers in the UNESCO Heritage sites Wangen-Hinterhorn, Litzelstetten-Krähenhorn and Sipplingen - Osthafen.

When citicens of Langenargen / Lake Constance reported wooden timbers in the shallow water zone near Schloss Montfort, a former castle at the shores of Langenargen, Bodenseekreis, the Landesamt für Denkmalpflege, Dienststelle Hemmenhofen assigned UwArc to locate, identify and assess the potential archaeological site. Oaken frames and floor timbers, dimensions and details of the construction indicate clearly that we are dealing with the relics of a shipwreck from historical times. The shipweck is partly covered by lake sediments, but large portions are exposed and threatened by currents and waves.

In the framework of a monitoring programme started by the a Landesamt für Denkmalpflege, Dienststelle Hemmenhofen UwArc documented wooden constructions in the shallow water zone near the Northern shore. At three different locations, all of them in close vicinity to the three medieval churches of Reichenau - Oberzell, Reichenau - Mittelzell and Reichenau - Niederzell long rows of oaken piles occur at the lake bottom. It remains open if the pile rows are only sections of a installation that originally lined the whole northern shore. Dendrochronological analysis will reveal the dating and the functional role of the medieval island with its famous monastery.

Recovery of scientific Devices from a Dam

When technical devices of a University of Constance, Limnological Institute, Environmental Physics working group proved to be hooked up at the bottom of the Schwarzenbachtalsperre UwArc, in cooperation with the cooperation partner VIB Schlimper GMBH carried out a search&recovery survey.

Sampling of Makrophytes in the Framework of the Seewandel Project

In the framework of the Seewandel-Projekt and assigned by University of Hohenheim, Institute of Landscape and Plant Ecology UwArc sampled underwater vegetation in Lake Constance - Untersee.

Assigned by the Landesamt für Denkmalpflege, Dienststelle Hemmenhofen, we executed monitoring works in the outlet of Lake Constance to the Upper Rhine. In the area for almost a decade underwater archaeological rescue excavations have been carried out. One of the tasks was to to win samples of sediment anomalies and assess the state of conservation in the "Orkopf" site. weiterlesen

2002 – 2004 the Landesamt für Denkmalpflege, Dienststelle Hemmenhofen, carried out an assessment of the underwater cultural heritage in the shallow water zones of Überlinger See. The underwater archaeological investigation yielded a variety of new discoveries and a wide range of conservation conditions. weiterlesen

Assigned and in close cooperation with University of Constance, Limnological Institute, Environmental Physics Group, UwArc supported the maintanance of technical devices with a Scientifc Diving Group.

Reichenau Island is an outstanding example for the religious and cultural role of a large Benedictine monastery in the Medieval. It is part of UNESCO World Heritage since 2000. While the island itself has been subject to substantial historical and archaeological research, its lake shores and shallow water zones have hitherto remained more or less unknown. UwArc, assigned by the "Pile Dwellings Information Center" started now a first systematic asessment of the shallow water zones in the vicinity of the island. weiterlesen

After completion of "BeLaVi" , a project of Landesamt für Denkmalpflege and co-funded by the German Science Foundation the archaeological knowledge on the Westallgäu region has radically changed. Our maps of the working area are now populated with 114 prehistoric sites. About 45% of them date to the Neolithic, indicating that the Westallgäu landscape was intensely used by Neolithic farming communities from the 5th millennium on. weiterlesen

Isolino Virginia is a small island near the western shore of Lago di Varese in Northern Italy. Recent research of the Museo Mirabello - Museo Civico Archeologico di Villa Mirabello, Comune di Varese, could show that the island is man-made. weiterlesen

Having been assigned to archaeological monitoring works in Konstanz – Frauenpfahl from 2012 on, we now completed the primary assessment of the Late Bronze Age site. weiterlesen

Sub-Bottom Profiler and SideScanSonar deployed at a Neolithic site at Degersee, Southern Germany

Hydroacoustic technology is a powerful tool for underwater archaeological research. It allows for the rapid, consistent, non-invasive assessment of large submerged areas, both surfaces and sediments, and is a source of hydrographic baseline data which is in many cases indispensable for the investigation of singular objects like shipwrecks as well as whole submerged landscapes. weiterlesen

Precisely dated, laminated lake sediments contain an amazing wealth of archaeological background data. If the palaeoenvironmental, palaeoeconomic and palaeoclimatic information they contain can be exactly synchronized to waterlogged archaeological evidence from lake shore sites, a dataset on human activities in landscapes far beyond the lake shores is generated. weiterlesen

Resulting of 19th and 20th century industrial installations some areas in the shallow water zone of the Seerhein at the City of Constance have ben polluted by industrial debris. Assigned by Arcadis Germany UwArc accompanied the remediation works with a diving team, carrying out documentation and sampling.

Roseninsel Island at the Starnbergersee is one of three sites in Bavaria that were inscribed into the World Heritage Site list in 2011. The site is famous for its rich archaeological potential, dating back to Neolithic and Bronze Age periods. In the same time it is suffering badly from erosion processes. The Bayerisches Landesamt für Denkmalpflege has started with conservation measures. UwArc accompanies underwater archaeological works caried out by the Bayerische Gesellschaft für Unterwasserarchäologie e.V (BGFU). weiterlesen

Freienbach-Hurden Seefeld is one of the sites inscribed into the serial UNESCO World Heritage "Prehistoric pile dwellings arond the Alps" list in 2011. When the site was assessed in the framework of management plans developed by the Unterwasserarchäologie des Amtes für Städtebau der Stadt Zürich UwArc was assigned to carry out hydrographical works.

In close cooperation with the BeLaVi Project Lead Partner, the University of Bern, Institut für Archäologische Wissenschaften UwArc carried out hydrographic works and a diving survey in the shallow water zone of Lake Burgäschisee, which is one of the Swiss sites listed in the serial UNESCO World Heritage "Prehistoric pile dwellings arond the Alps"

Long-term protection for a 16th century vessel, Island of Reichenau

Reichenau Island in Lake Constance, Southern Germany, is famous for its rich cultural heritage. The island is UNESCO World Heritage Site since 2001. At all times, watercraft played an essential role in the religious, cultural, economic, and social life of the island. Archaeological remains of boats and ships are therefore important sources to the island´s history. weiterlesen

We know about two dozen shipwrecks of historical times that are preserved in the sediments of Lake Constance. Only few of them have been systematically investigated by archaeologists. Some of the so far known vessels are under threat by erosion, others suffer from damages caused by badly trained recreational divers. All of them are worth preserving for future researches. weiterlesen